From Pathologic Wiki
(Redirected from The Masks)
Jump to: navigation, search 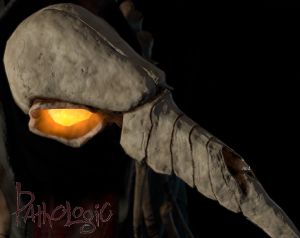 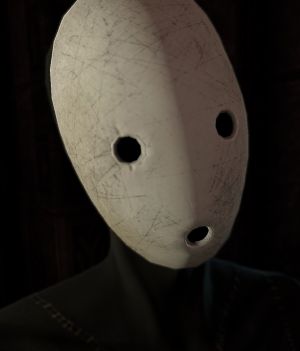 The Masks: they are the Executors and the Tragedians. Sometimes their presence is caused by in-game matters. In other cases they breach the Fourth Wall in order to speak directly to the player—they often appear to explain discrete game mechanics.

They are your ever-present companions who guide you through the game—or perhaps deceive you; whatever the case, they are definitely following your progress very closely. They also appear at the end of each day at the Theatre to perform a pantomime based on the events of the day.

It's hard to say how many Tragedians and Executors there are in the Town, and if the Tragedian and the Executor appearing here and there are the same two people or not.

The Executor stage costume—a heavy cloak and a bird mask—is a representation of the Reaper, or Death. They are often symbols of the Plague. If the player fails to complete certain crucial tasks, or if the Plague otherwise advances, an Executor will appear outside the door of a Bound who has fallen ill as a result.

During the outbreak, orderlies wear Executor costumes festooned with bone pendants in order to ward off the Plague. The Bachelor and the Changeling are able to obtain and wear an Executor Mask and Cloak.

Tragedians dress in form-fitting black stage costumes and white masks approximating a human face. The Tragedian is a placemarker hero, a shade of what could have been were it not for you; like all mimes, they're gently compassionate and moderately useless.