From Pathologic Wiki
(Redirected from Rat racing)
Jump to: navigation, search
This entry refers to the original Pathologic (2005). 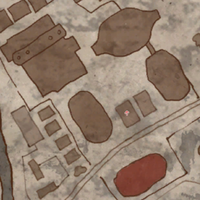 Rat Racing location on the map, marked with a red arrow

Rat Racing is a side activity in Pathologic that the Haruspex and Changeling can take part in as a means to gain money. Rats are captured by crouching and pressing the "use" key (E by default) while sneaking behind them. It can be found in warehouse Two in the Works, between factory buildings #3 (The Butchering Room) and #2 (The Long Facility). They may use either a Rat or a Brown Rat.

Rat Racing becomes available from Day 5 onward. The Haruspex will recieve a letter inviting him to participate in the races, while the Changeling recieves no such invitation but can still participate as long as the Doghead is there. Winning the race nets a total of 500 coins, while the result of losing is nothing except a loss of time and a rat.