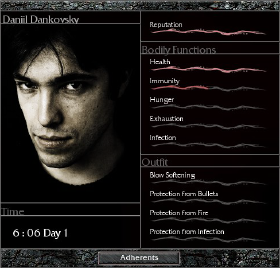 The Town-on-Gorkhon is unlike a normal world—people can starve or tire themselves to death within a single day. Locals claims that it's in the air; that every breath you inhale is slowly killing you.

The player must manage a variety of stats to stay alive, each function closely linked to the other. Along with basic bodily functions such as health or hunger, the player is also faced with outside forces such as reputation or the flow of time.

The player's core stat. It is tied to all other functions—if you become hungry, exhausted, or plagued, your health will suffer. Health can also be lost during combat.

Health is increased by healing items such as tourniquets or bandages. Additionally, painkillers increase health should they be taken before the player sleeps.

Immunity is tied directly to the player's infection and acts as a "buffer" between the plague and the player's other stats. While the immunity meter is full, it slows the progress of infection or can prevent it altogether.

It can be be managed and increased by immunity-boosting medicines or preventative vaccines.

Naturally, hunger is sated by food items. Increases hourly. If the meter is full, the player's health will decrease continually until hunger is decreased, or death.

Food can be bought at stores, traded with townsfolk, or occasionally found. Different kinds of food can affect stats in different ways: for example, lemons strengthen immunity but increase hunger, while water lowers hunger but increases exhaustion.

Fatigue increases as the day passes. If the meter reaches full, the player's health will slowly decrease.

The ideal way to deal with exhaustion is to sleep—but you can only sleep in the beds of private homes, such as the houses of Bound characters. Coffee can also be used to decrease exhaustion at the expense of health.

The player's level of sickness. Once infected, the meter increases continually; the higher the infection, the more health the player loses over time.

Infection cannot be fully removed without the use of special items, but can be managed by using antibiotics.

The level of respect the townspeople have for the player. The lower the meter, the higher the chances the player has of being attacked and losing services. It can change greatly depending on the day or the choices of the player.

Reputation can be increased in a number of ways: completing quests, helping plague victims, getting rid of bandits, or donating money. Likewise, it can also be reduced by killing or insulting townsfolk.

Like in our world, the days in the Town-on-Gorkhon remain divided into 24 hours. One in-game hour corresponds to around five real-world minutes.

Midnight marks the deadline for quest completion and events, though 7:00AM is considered the start of the next day. Be warned—if quests remain uncompleted by the end of the day, they will be failed and one of the player's Bound will fall ill.