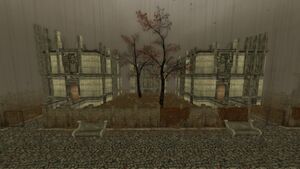 The Crucible in Pathologic Classic HD 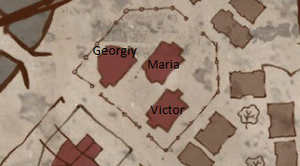 The Crucible (Горны) is home to the Kain family. It's located in The Bridge Square, on the West bank of The Gullet.

The Crucible consists of three separate mansions surrounded by a high, gated wall. The three wings of the mansion belong to Victor Kain, Georgiy Kain, and Maria Kaina respectively. The Crucible is covered in intriguing and strange artwork, as well as portraits of members of the Kains. It is the closest residence to The Polyhedron and is also located close to the family tomb, where Nina Kaina is buried.

All playable healers may rest in either of the beds in Maria's wing. One of the beds is located in a bedroom with childish knickknacks and likely belongs to Khan, who rarely leaves the Polyhedron.

The Haruspex is able to save at the clocks in all three wings. In contrast to Pathologic, in Pathologic 2 Georgiy is not found in the main section of the mansion, but is instead found inside of a workshop on the left side of his home.

On Day 1, after arriving in Town, the Bachelor goes to meet with Georgiy Kain. He will learn that Simon Kain died before he arrived, and is then sent to speak with Victor Kain and Maria Kaina. After spending the day investigating, it becomes apparent that Simon died of a contagious illness, and the Bachelor hurries to Victor's Wing to find Stanislav Rubin to warn him.

On Day 3, the Bachelor receives a letter from Georgiy Kain, who tells him that something has happened to Rubin and Simon Kain's body. Georgiy will also tell the Bachelor to talk to Victor Kain. Victor suspects Vlad the Younger knows more and the Bachelor must relay messages between Vlad Jr. and Victor until he is allowed to enter the Polyhedron and Vlad Jr. tells the Bachelor where he suspects the body to be. After investigating the location, the Bachelor returns to Georgiy to report his findings.

On Day 4, Victor asks the Bachelor to investigate the Skinners district. The Bachelor brings him a Crowbar as proof that the district is free of infection, as reported by looters.

On Day 5, the Bachelor can ask Victor to help free some innocent people who had been imprisoned by Saburov.

On Day 6, Victor tells the Bachelor that the Cathedral's quarantine was apparently broken during the night and everyone inside became infected and died. The Bachelor can also ask Georgiy to forgive Rubin, but Georgiy will only speak cryptically about 'the lens of Focus' and believes his brother Simon is still alive.

On Day 7, the Inquisitor asks the Bachelor to help her reconcile with her niece, Maria Kaina. When the Bachelor talks to Maria about this, she becomes upset and afraid and threatens to leave her house. The Bachelor then talks to Victor, who tells him that his daughter likely went to Peter Stamatin's Loft.

On Day 10, Katerina Saburova tells the Bachelor that she felt Simon Kain's presence at the Crucible. After talking to Rubin, the Bachelor decides to personally investigate and speak to the Kains. Maria and Georgiy speak as though they have become different people, Georgiy in particular is apparently becoming possessed by Simon. Victor will provide some explanation as to what is occurring and asks the Bachelor to spread the rumour that Georgiy is going insane.

On Day 11, the Kains request the Bachelor to assist with Maria's transition into becoming a Mistress. Maria's Wing will be locked and inaccessible. Victor tells the Bachelor that new Mistresses need to be recognized and requests he bring tokens of acknowledgement from the other future Mistresses, Capella and the Changeling. After the Bachelor obtains the items, he will find a crowd of people in front of Maria's Wing. They will tell him to take the items to Nina's tomb.

On Day 6, the Haruspex will receive a letter from Victor Kain with an invitation to visit him. After being directed to her, Maria will offer an insincere apology and request he retrieve a diary from her mother's grave.

On Day 8, Georgiy Kain sends a letter asking the Haruspex to speak with him. He will advise the Haruspex to give up Vlad the Younger to Taya Tycheek. The Haruspex can do this for a monetary reward from Georgiy, or give up Big Vlad instead.

On Day 12, as all residents of the Crucible are members of the Bachelor's Bound, there is a chance that they will be infected and an Executor will be stationed outside of their wings. If the player wishes for the Bachelor to join them in the Cathedral, they must cure them with a Shmowder or Panacea.

On Day 3, after finding Stanislav Rubin, the Changeling can choose to betray him and tell the Kains where he is. If she attempts to talk to Georgiy or Maria, she will lose a lot of reputation. If she talks to Victor, he will not arrest Rubin, but thanks her for her honesty and gives her a monetary reward.

On Day 4, Katerina Saburova asks the Changeling to convert Mark Immortell to the Humbles. She will find Mark at the Crucible with Maria Kaina.

On Day 5, the Changeling must find Georgiy and ask him to forgive Rubin taking Simon Kain's body in order to learn about the Vaccines that Rubin and the Bachelor have made. The Changeling will also receive a letter from Capella who had a vision of something terrible happening at the Cathedral and requests the Changeling ask Maria if she also had a vision.

On Day 7, Katerina teaches the Changeling about Mistresses and sends her to speak to Capella and Maria, as they are future Mistresses.

Starting from Day 8 until Day 10, Maria Kaina will send the Changeling a letter every day asking her to look for the Bachelor and warn him that he is in danger. If the Changeling complies with her request, she can visit Maria in her wing at the Crucible for a reward.

On Day 12, as all residents of the Crucible are members of the Bachelor's Bound, there is a chance that they will be infected and an Executor will be stationed outside of their wings. If the player wishes for the Bachelor to join them in the Cathedral, they must cure them with a Shmowder or Panacea.

On Day 3, the Haruspex can find Stanislav Rubin in Maria's wing during his quest to reunite his old friends. Maria herself will appear once they have spoken to kick Artemy out of her home. Georgiy Kain will be in his workshop, and will be available for conversation about recovering the Burakh family home. He is surprisingly acquiescing to the request. There are three Townsfolk outside Victor's wing, watching birds. All three will wish to discuss their observations and the significance of the birds as omens. There is also a woman outside Georgiy's wing waiting for her partner and directing those who wish to join the militia.

On Day 4, Georgiy will be available in his wing for a short conversation on the nature of the plague.

Victor's Wing is inaccessible during The Marble Nest. When hovering over the building, Victor Kain will be noted as dead.

Maria's Wing is inaccessible during The Marble Nest. When hovering over the building, Maria Kaina will be noted as in danger.

Upon waking, the Bachelor will be informed by Sticky that the Judge has stopped by to see him. While walking through the Town, the Bachelor will begin to hear worrying rumours that the Judge has lifted the quarantine - an action that would put the already vulnerable Bridge Square and Atrium at risk. Outside of the Judge's Workshop, a Tragedian will be standing, uttering worrying things about the Judge's choices. Inside, the Judge waits. When confronted about the quarantine measures, Georgiy Kain will explain his philosophy, citing that the Plague may merely be a test that the Town must pass.

Three anti-plague committee members are located outside Georgiy's Wing, and can be spoken to about the Town and the epidemic. The Bachelor can express his opinion in return and encourage further measures, but ultimately cannot reverse the changes Georgiy has made. They will later be replaced by Tragedians.