From Pathologic Wiki
(Redirected from Circle of Suok)
Jump to: navigation, search 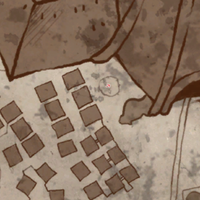 Ring of Suok location on the map, marked with a red arrow

The Ring of Suok is a combat arena where two participants fight to the death via fisticuffs as a means to appease Suok through the spillage of blood. It is located in the Earth district of the town, behind the Crude Sprawl and between the Termitary and the Abattoir.

The Ring of Suok becomes active from the morning on Day 7 until the end of the game, and the Bachelor and Haruspex can participate in it. When stepping into the ring, they will go against a butcher, which can be taken down with 3 punches to the head or 7 punches to the body. The reward for winning is a single vial of blood.