From Pathologic Wiki
(Redirected from Children's Caches)
Jump to: navigation, search
Come now, you haven't given us any time to change the set!

This entry contains potential spoilers for Pathologic 2. Read at your own risk. 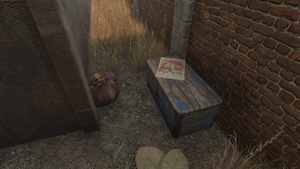 A children's cache, located behind the Soul-and-a-Half Fortress.

Children's Caches are small, hidden boxes scattered throughout the Town in Pathologic 2. They are used by the children of the Town as part of a game.

Caches reset every day at 07:30, except for the duration of Act 2 due to the children's cache quest.

The rules of the cache game are simple. When one finds a cache and takes something from it, they must leave behind items of equal value as well as a note.

Since each child values every item differently, it is up to the player to decide how much they want to take and leave in the caches. It is currently unknown how the game determines the value of the items taken and left by the player. For details on what each child values, see here.

Whether the player leaves behind items that are worth too much, too little, or just enough will not affect cache-related quests and story events. However, the odds of finding multiple items decreases if the player is deemed to have left too few items in the caches.

After Day 9, all the children of the Town are taken away by the Army. The Farewell Note written to the Haruspex says they have left the game to the jerboas. It is currently unknown how differently cache item values are calculated after this point, if there is a difference at all.

The following items can be found in caches.

The Haruspex is invited to the children's cache game during Act 2. A messenger tells him that a group of children are waiting for him near the Cathedral. One of the children - Pup - tells him that they know he is searching for his father's murderer and believe that they can help him find the killer. The children think the first and only other adult they've invited into their game has killed Isidor Burakh and say that the man has been leaving behind scary and threatening notes. 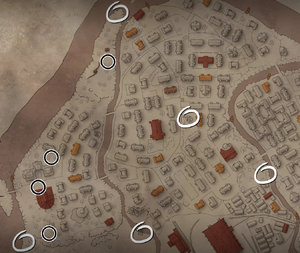 The locations of the quest-relevant caches.

Each of the Notes found in these caches will inform the Haruspex of children's various affairs, such as the Tidy Note which details the gathering of children at the Train Station in the evenings. The Dusty Note is always found in the cache located by the Stairway to Heaven and directs the Haruspex to a playground in the Marrow called the Tadpole Yard.

Within the Tadpole Yard, the Haruspex will find three children gathered in the centre, with two of them sitting on the swings. These children will tell the Haruspex that they have something special for him, but he has to play a game of hide and seek with them first.

Once he has agreed to the game, the three children will hide in various places around the yard. They will be singing a song, which the Haruspex can follow to find them. After tagging a child, the Haruspex will be able to trade with them. These children will have a variety of nuts and will basically give them away, as they value the Haruspex's nuts at 2, but their own nuts at 1. One of the children will be holding a Shmowder, which is only worth 5 points compared to the usual 35.

During Act 4, the first children's cache that the Haruspex finds will contain the Mysterious Note. The children say they have found the murderer who will be at Friday's Yard, but the Haruspex has to wait for "when pigs fly". After finding the note, the Haruspex's mind map will update automatically at 18:00 on Day 8 to reveal the location of the murderer in the Skinners district. When the Haruspex goes to this location, he will be ambushed by an Ouzel. Killing the man will not cause any changes to reputation.

When looting the man who attacked him, the Haruspex will find a Suspicious Note. It is similar to one of the notes found in the children's caches, telling the man to meet a thief in the Friday's Yard. Realizing that he has been tricked, the Haruspex becomes angry and goes to talk to the kids at the Soul-and-a-Half Fortress. When he arrives, he talks to Yawn. Yawn asks him if he found the murderer and he asks why the children tricked him. They tell him that it was because he had been playing the game incorrectly.

This has no bearing on whether or not the player can continue to find and use the children's caches.

Regardless of how the player has been playing the children's cache game, they will always be able to receive the Farewell Note. This interaction is largely flavour text, as receiving this note does not guarantee that the player will be able to find two caches with Shmowders in them.

All of the notes found in the children's caches after Day 9 will be the Kids' Farewell Notes.

These poems are said by the children gathered in groups during the cache game in Act 2. Different clips will play randomly when the player is near a group of children.


Eat our feast:
Eggs are stolen!
Leave our home:
Stones are broken!
Ride our mount:
Legs are chosen!
Close our eyes:
Bones are frozen! [1]

No food, no sleep, I seek a treat:
of grundly sneeds and bander-meat.
Devour it all and feel so strange,
as all my limbs begin to change.

I spurn in cruel pantagony
and feel my legs turn hexady
with wings that bear my teeth a-vise,
and mouths aglow with sneeching eyes.

We all watch as the bear gets his paw in a snare
as he tries to untangle his tangled affair.
He can try as he might, gripe and growl in his grove,
but he still can't untangle the tangle we wove.

We all drag our own nets, we all catch our own fish,
we all tug our own strings, we all watch what we wish.
We all keep all our blood trapped tightly within
all the veins you instructed we hide beneath skin. [3]

Mess with the bull, you get the horns,
my only rose is naught but thorns.
I wrap myself in claws and teeth!
You better hope you're fleet of feet!

A muddy foot has made a mess;
the guilty party'll soon confess.
Whose mess is this inside my house?
A swing, a miss, a running mouse. [4]

This is the song the children are singing during the Hide and Seek game in the Tadpole Yard. It is only in Russian and was not dubbed for English. It is likely that the song is Что Приходит Ниоткуда и Уходит в Никуда (What Comes From Nowhere and Goes Nowhere) by 4 Позиции Бруно.

In English the song reads:

A kitten with a wet nose and silky fur,
He has a funny tail,
And six fast feet,
Two hind legs, two middle legs,
And two front legs,
That's the millipede papa has come up with.


My father is a scientist, he studies animals
He walks by the dumps, catching rats and seagulls
Two rats with white feathers,
And two dull seagulls,
Covered with pimply frog skin,
They yearn without feathers and want to run away


Also there is an ant,
So large it's the size of a goose,
It frightens all the animals, and I am afraid of it,
When it hobbles on its feet,
Then knocks on the door, and reads the poem:
I am ant, pour me some water!
No less than a bucket, it's time for me to drink.