From Pathologic Wiki
Jump to: navigation, search
This entry is painfully incomplete. Perhaps it is your fate to complete it. 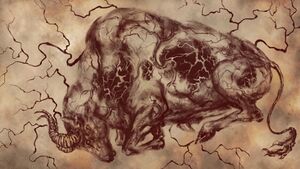 Bos Turokh (Бос Турох, World Bull, Cosmic Bull, great Bull, the Father of Flesh, the Carver of Lines, the Bearer of Horns) is the central deity of the Steppe people's religion. According to the legends, Bos Turokh created the Universe, Wheel, Time, and Fear after consuming Suok, the personification of evil. Everything that happens to this being, all of its vital processes, all of its shapes, are signs and semblances reflecting all that was, is, or will be in this world. The Legend of the Bos Turokh comes from "Baur Meges", a tale of the world's creation.

Bos Turokh's earthly image is known as aurochs, Bos Primigenius or "Buha-noyon" as they were called, an ancient species of Steppe bull whose lines are akin to the lines of the Cosmic Bull.

The Kin use the auorchs blood in sacrificial rites and consider the Abattoir Bos Turokh's house, a sacred place closed to outsiders.